This weekend I went to the Dutch Design Week in Eindhoven, just in time for a new “Going places“! The Dutch Design Week is a 9-day event in which Design in all its facets is at the centre. Unfortunately we were only there for one day, definitely not enough time to see everything (with 84 different locations/stands!). However we did see three of the main ‘big’ events: the Dutch Design Awards, the Design Academy Eindhoven Graduation show and the ‘Klokgebouw’ which held a lot of stands in its four halls. 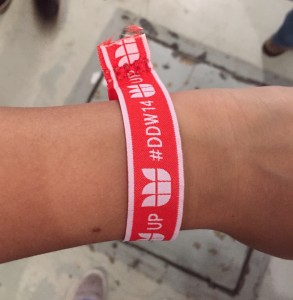 We started at ‘het Klokgebouw’ part of the old Philips industry terrain in a big building with (as you might have guessed) a big clock tower. The terrain itself had a really nice thing going on, there were small pavilions, some with food and some with a Design exposition. There were people drinking and eating everywhere, and it had a nice atmosphere. We entered the building and walked through the entrance hall straight into the first hall (of four).

One of the first things I spotted (and absolutely loved) were these pots, made of a combination of plastic with an intricate woven pattern and concrete. They are by a brand called the “3 dots collective” and the collection is called: “Pot.purri”. The idea is that it is a modular system, the user is able to make their own combination and create lampshades/pots/jars/vases or whatever you can come up with. 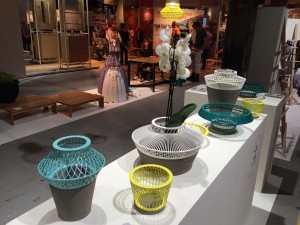 The next thing to really catch my eye was this chair: The Granny’s Chair. A chair specially designed for the elderly (wouldn’t have guessed that, now would you!). It is supposed to be really comfortable and easy to get out of. Mostly it just suits the sitter wonderfully, having been designed with the measurements of the elderly instead of us young youthful people. Also, I like the colors! 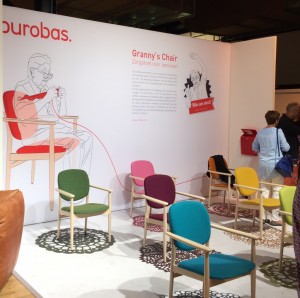 Lastly in these wonderful halls full of stuff I desperately wanted to own, were these shelves made of steel tubes and wood called ‘Flens’ by a designer called ‘Chris Slutter‘. There was also a table that (like the shelves) was the perfect combination of classic/chique and tough/cool. 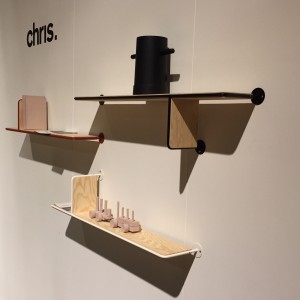 After the Klokgebouw we went to the Dutch Design Awards, where there were a lot of nice projects. At the end you could vote for your favourite design and mine was this: 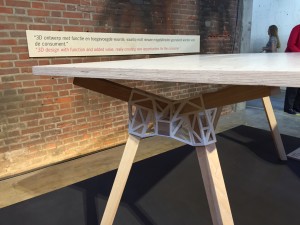 It is a modular system called ‘Keystones‘ which is an open source-model for connection elements that can be 3D-printed on site to make the assembly of products really easy. As an example they showed this table, the legs of the table are all simple rectangular/squared beams which had been fitted in the mounting pieces. I really like the combined look of the white plastic with the wood.

Lastly we went to the graduation show of the DAE. After a long climb up to the fourth floor, we arrived at the exhibition. All the products were laid out on white tables and all the students had tear-off leaflets to take with you, if you were interested in the product. I really like this product-range which is a combination of wicker and plastic (I think, I forgot to take a leaflet >.<). Again the combination of materials really struck a cord with me, I also really like the color combination. 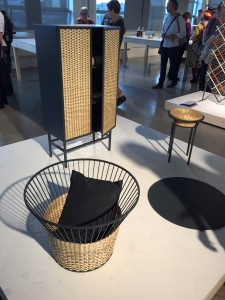 I really liked going to the Dutch Design Week and really regret not having been able to go for more days (curse you ‘studying’!). Obviously we have seen a lot more than just the few pictures I posted here, but there was just so much I had to make a selection. As you might have guessed, the combination of (colorful) plastic in combination with a more natural color (like concrete/wood) is one of my favourite things right now. It just makes such a nice combination!

One of the things I have not mentioned here, but that we also saw a lot of was 3D-printing (except for the Keystones) and all its possibilities, from 3D-printing entire houses to jewelry and even food and I am really excited what other options the future shall bring us!