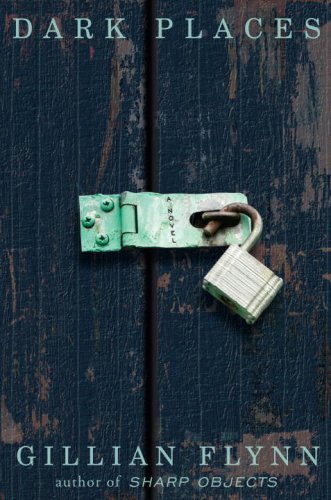 A genre that I have been getting increasingly into is thrillers. Which you might have guessed from the last few bookposts I did. This week is another thriller, and also another one from Gillian Flynn. If you haven’t read my review of Gone Girl, you can find it here. Just like Gone Girl, Dark Places is being turned into a movie. At first I thought I would be interested in seeing the movie as well, especially since it stars the amazing Charlize Theron in the lead, but after reading the book I have to say I might skip the movie. Why? Read the review and find out ;)

Dark Places is about Libby Day. When she was seven her mother and two sisters were brutally murdered in what was dubbed “The Satan Sacrifice” of Kinnakee, Kansas. Libby testified that she saw her fifteen-year-old brother Ben kill them and he is sentenced to life in prison. Twenty-five years later a group called the Kill Club contacts her and asks her if she wants to talk about the murder. Most importantly they want to know if she is sure that Ben did it, because they think not. This starts a search for the truth for Libby in which she has to go back to the ‘dark place’ in her mind that is the evening of the murder.

I loved it. It was very dark, but not too dark for me. I am scared easily, but like Gone Girl this book was more of a mystery than a real thriller, and I love a good mystery. The book was cut up in parts in the ‘now’ from the perspective of Libby and in parts from the past, which switched between points of view from Patty Day (the mother) and Ben Day (the brother). In the end of the book this means that the murder is actually played out, from both the perspective of Ben and of Patty. I really like this set-up, although it really tempts me to skip to the end and read what happens (I didn’t). I also really liked the way the plot unfolded. At the start I started to have some ideas of what could have happened, but I did not see the ending coming and I was off base on some of the stuff.

Yes. If you enjoy mysteries, than this one is a must-read. The thing I really like (so far) of the books I have read from Gillian Flynn, is her female characters are so layered. Libby is extremely unlikeable, especially at first, but she is real and while reading you do understand her motives and how she got how she is. The same goes for Amy in Gone Girl. I think you should read this book and I will be reading the other books by Gillian Flynn.