Lauren Oliver is the author of the Delirium trilogy, a dystopian series that comes close second to the Hunger Games in my favorite dystopian YA. So when I started reading Panic, a standalone novel, I suppose I was expecting more dystopian fantasy, but I got the dystopian like reality of a small town in America instead. 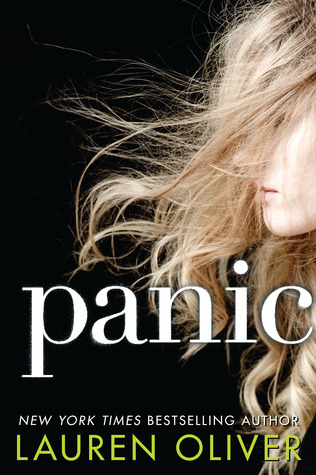 The book follows Heather and Dodge, two seniors of a high school in ‘Carp’ a dead-end town in the middle of nowhere. It is the summer, the end of their final school year, and Panic is about to begin. Panic is a ‘game’ which tests the participants ability to face their fears and to not panic. Throughout the year all seniors pay into a pot, which the winner of Panic will win and amounts to around $50,000. There are two judges, selected by the previous judges, and no one knows who the judges are. Dodges sister got injured in the ‘Joust’, the final round of Panic, in a previous year and he is participating to avenge her. Heather was not planning to participate, but she finds herself in the game anyway. Together with her best friends Bishop and Natalie she tries to win anyway.

I really enjoyed the book and the characters. The book is told alternatively from Heather’s and Dodge’s perspective, which adds to the story I think. I think the idea of the game is really interesting, I can see it existing for real in a town where there is nothing else to do and a game for fun just grew into something so big that it might start to get out of control. The characters show the struggles some teenagers have to face in their aim to get out of such a small dead-end town. However I feel like not all plot lines were well completed at the end and not in an ‘open ended’ kind of way, more in a ‘we will just forget about this now’ way, which was a waste of a good opportunity I think. The ending was also a bit too much for me, but it did suit the book I suppose, I would not know how better to have ended it.

If you enjoy reading about self-destructing teenagers in a town that has no way out, then this is the book for you. I also think that if you liked the mental survival aspect of the Hunger Games that you will like this book where it is even more obvious that people really will do anything to people for money and entertainment. Let me know if you pick it up and what you thought!