People who I have shared my favorite books with, know I absolutely loved The Night Circus by Erin Morgenstern. So when the people from the Bored to Death Bookclub were looking for someone to read the recently released “The Paper Magician” I figured would be right up my alley. 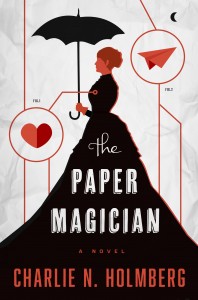 The trilogy is set in Victorian London in a world where magic is possible. However there is one limitation to this magic: it can only be performed on man-made materials. The main character in the trilogy is Ceony Twill, a recent graduate of the Tagis Praff School for the Magically Inclined. Ceony finished her studies in just one year, the minimum time necessary to graduate, and is now on her way to her apprenticeship for her assigned material. She had hoped to become a Smelter (someone who can perform magic on metal), but instead she gets assigned to Folding (magic performed on paper). Her teacher is Magician Emery Thane, a recluse living on the outskirts of London in a house disguised by paper magic. Ceony dislikes Folding  and Magician Thane at first, but soon realizes both have a lot more to offer than she initially thought.

In the second book a good friend of Ceony is introduced, a Gaffer (who performs magic on glass) apprentice named Delilah. Ceony and Delilah were friends at Tagis Praff and have remained in touch during their apprenticeship. Delilah helps Ceony in the second book to transport through mirrors, using her glass magic.

Unfortunately it is not all sunshine and glitter in this wonderful alternate universe. Because magic can be performed through ‘man-made’ materials, someone has made the brilliant discovery that the human body is also man-made. This is the set-up for the ‘bad guys’ of the Paper Magician Trilogy. Magicians who decide to bond with flesh and blood are called Excisioners. One of those Excisioners is the ex-wife of Magician Thane, Lira, who steals his heart (literally) in the first book. Ceony sees this happen and tries to get Magician Thanes heart back before it is too late. The second book focuses on two men who are part of the same evil group as Lira, one of whom is the man who convinced Lira to become an Excisioner in the first place. They are hunting Ceony down, trying to get her help on solving an important puzzle.

Is it a recommendation?

For me the magic in The Paper Magician is the main selling point. I really like how the writer has thought the possibilities of the magic on a material through. The Paper magic is sort of Origami taken to a whole new level and the Glass magic takes mirrors into account, but also the possibilities of breaking and creating glass. Even the slightly macabre Flesh/Blood magic has some interesting abilities. This magic part is what will make me come back for the third part.

However I did not like everything. Especially the focus on the appearance of Ceony and the way Lira is portrayed as a sexual deviant seemed incredibly unnecessary. Ceony also acts a bit childish every now and then, which makes the whole storytelling appear childish. However the positive of the imaginative use of magic really overpowers the negative, so for me it is definitely a recommendation!

Filed Under: Books, Review
Tags: Book, Charlie N. Holmberg, Review
Review: The Perks of Being a Wallflower
Review: Me, Earl and the Dying Girl