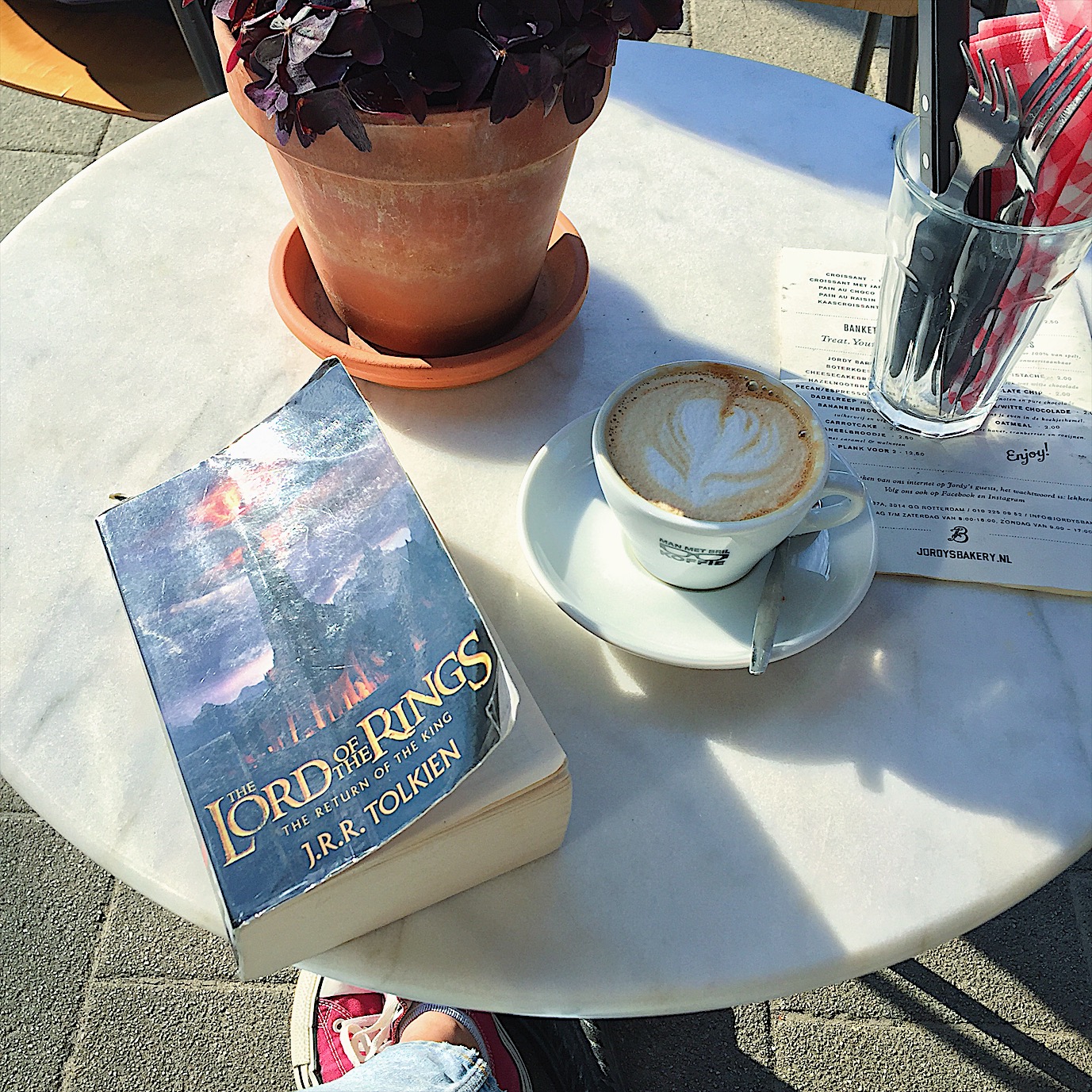 A quick catch up on the books I’ve read in April. Next post will hopefully be up a bit sooner so that one will hopefully include a ‘TBR’ for June. I am a bit slower in posting these overviews because I keep reading more and more so they’ve become a lot more work :p. I also post short reviews on my Instagram, so if you want to read the updates sooner, follow me over there!

What I read in April

‘Heroes’ is the second book in the Greek retellings by Stephen Fry. This one covers heroes like Heracles, Theseus and many others.

Stephen Fry does a great job retelling the myths and adding some dramatic touches. I listened to the audiobook which has the listening to Fry act out the parts, but the con that you can’t really go back in the book to read something again.

The Dutch ‘’ of 2019 is about a man, a French substitute teacher, who has a //something bad and while in the ambulance he looks back at the previous period where he was trying to write a book.

This was horrible. Putting aside the fact that the theme of the was ‘The mother, the woman’ and the female characters in this book are as flat as a penny, the book was just not good. The plot was weird, side characters made no real sense and I am unsure what the writer wanted to accomplish in this novella.

‘My Absolute Darling’ by Gabriel Tallent 4/5

It’s about a 14-year-old girl who lives with her father who is trying to prepare her for the end of the world in a horribly abusive way.

We read the story from the girls perspective and that creates a space to see her emotional and psychological struggle in a very real and raw way. I can imagine that this book is one big trigger, but if you don’t mind that it makes for a really good read. The language is amazing and the descriptions of nature are stunning (although sometimes a bit longwinded).

‘The Adventures of John Blake: Mystery of the Ghost Ship’ by Philip Pullman 4/5

A fun graphic novel about a ghost ship and time travel and evil billionaires.

This is definitely for a younger audience, but an entertaining read nonetheless. The plot is exciting, there is a spunky young girl who gets to go on an adventure. All things.

A book on how to learn/start reading poetry in Dutch with different chapters on different types of poetry and the different parts of reading/understanding poetry. Each chapter also has some recommended reading.

I enjoy poetry, but I didn’t think I was ‘getting’ poetry which is why I wanted to read this. It is a fun and easy read, it gives you some guidance on reading poetry and a lot of suggestions for collections to pick up. Would highly recommend this little book if you want to get started or want some more tips.

‘Grief Is the Thing with Feathers’ by Max Porter 5/5

About a man whose wife has unexpectedly died and he is left in the house with their two young sons. Then a crow shows up.

After reading about how to read poetry, I wanted to put the theory into practice and picked up ‘Grief is the thing with feathers’ from my poetry shelve. I’ve read it 2 years ago but didn’t feel like I ‘got’ out of it what it was trying to give. Rereading it with my newfound knowledge of poetry was amazing. I was bawling, snot everywhere, what an amazingly sad and tragic little book this is.

‘The Raven Boys’ by Maggie Stiefvater 3/5

About a girl who sees a boy who will die in the next year. The boy meanwhile is trying to find a dead king. There is magic, there is a shifty teacher, there are ghosts. Welcome to a paranormal ya novel!

I had a hard time with this book. In theory, it was a nice paranormal ya novel, but in practice, it maybe had just a bit too much going on? That or I might not be into this genre as much as I used to be. It kept me intrigued enough to finish, but not enough to make me want to continue the series.

A collection of true stories people have sent to an NPR show. Stories range from half a page to four pages and are about all types of subjects.

Although the concept was really cool, the stories themselves were not always great. I read a few before bed in the evening because it isn’t the kind of book you race through since some of the stories have to settle a bit before you rush on to the next. Maybe it is the fact that I am more on a ‘want to finish fast’ sort of reading spree now, or the fact that not every story was captivating (as happens when you retell a true story that happened to you), but I just felt kind of meh about this book.

About a man who works on Wallstreet and also is a massive psychopath and misogynist. He also kills homeless people.

In a very weird way, this book reminded me of  ‘My Year of Rest and Relaxation’. ‘American Psycho’ captures the Wallstreet-type of cocaine-drugged, money grabbing self-absorbed 90s and I feel like ‘My Year of Rest and Relaxation’ aims to capture the sense of overwhelmedness in the upcoming age of the internet and the search for a way to numb ourselves through a quarter-life crisis.

I didn’t rate either book on Goodreads because I thought they were very well written books that make me think, but at the same time, I didn’t exactly enjoy reading the books. Maybe I need to reread them in a decade or so.

About a psychologist who joins a team on the alien planet of ‘Solaris’ where the entire planet is inhabited by a ‘living’ ‘ocean’.

I didn’t really like this book, mostly because of all the science and bits that were like half the book (at least it felt like that). But I can picture Solaris very clearly so in that sense it was well written. Maybe too sciency sci-fi is just not really my thing.

‘I’ll Be Gone in the Dark: One Woman’s Obsessive Search for the Golden State Killer’ by Michelle McNamara 4/5

A non-fiction account of McNamaras search for the Golden State Killer.

I am an anxious person with too much imagination. So reading true crime or other crime/violent books (like ‘American Psycho’) is walking a very thin line between fascination and having nightmares. The nice thing about ‘I’ll Be Gone in the Dark’ is that it shares enough detail to make you aware how awful this dude is, but not too much so all you’re reading is gore. The other thing is Michelle McNamara’s writing, it just sucks you in but in a friendly sort of way.

If you’re into true crime, this book is definitely a must-read. I do hope they will republish at some point to look at all the speculation side by side with the actual killer to see where they were wrong and where they were spot on.

The third and last installment of ‘The Lord of the Rings’, which chronicles the battle at Mordor and the destruction of the ring.

This last book was a lot of moving parts and that made it hard to keep my attention to the book sometimes. I did really like it though. It could have had more Legolas/Gimli, but I’m happy with the amount of Merry/Pippin and of course, the faves Sam/Frodo, what a pair.

I skipped the appendices this time, but maybe when I reread this series in a couple of years I’ll be nerd enough to also read those.

I don’t remember much of my April reading, but looking over the books I read, I read some really great ones. I did do another library binge, which is when I go to the library, check out a stack of books and then I need to read those before I get to my owned books. If I keep this up I’ll never empty my tbr shelve…

In March I wrote my TBR wishlist, it was this:

I read the first two but then got distracted by library books and such. Still, 12 books isn’t bad at all so let’s see how the rest of the year goes!

Even though it is now June, I still know what I wanted to read in May because I posted the following stack on Instagram.

Spoiler alert, I didn’t manage to read all of these for obvious reasons (there are too many books on this list).