If you look at my blog posts the last favorites I wrote was way back in June and it is now already October. I really enjoy making these favorites and I want to continue writing them. Therefore this post is a little catch-up of the past three months so next month can be a ‘normal’ one-month favorites. 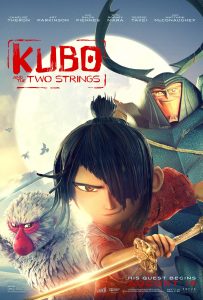 I had expected to watch more movies these past three months. As you might know, or not, I went to the USA so the flights offered enough opportunities to watch loads of movies. However plane headphones suck, so I ended up watching no movies and just listening to some audiobooks on my phone instead. Thankfully I did go to a few movies when I got back and looking back on the past few months my absolute favorite was ‘Kubo and the Two Strings’ from Laika studios. I already love Laika’s previous movies (The Boxtrolls, Coraline and Paranorman) so I really wanted to see this one and boy, it did not disappoint!

The movie is actually aimed at children, but similarly to most Pixar movies it is highly entertaining for adults (and people in-between children and adults, like me). This was made even more obvious by the fact that the seats in the screening I went to were filled with no-one under 18.

Kubo and the Two Strings is about a young boy named Kubo who must locate a magical suit of armour worn by his late father to defeat a vengeful spirit from the past. He goes on this magical quest helped by a monkey (voiced by Charlize Theron) and a beetle (voiced by Matthew McConaughey). Now if that does not sound like a spectacular children’s movie I don’t know what does. The entire movie is created using stop-motion and a bit of help from a green screen. If you are a huge movie geek I would suggest looking up some of the behind the scenes, it is amazing what they have created.

What I loved about this movie, and what I honestly love about all Laika films, is the combination of amazing visuals and a real story. Their movies are made so lovingly and the handmadeness of all the characters and sets really helps to add to the realness and roughness of their stories. Because what I mean with ‘real story’ is that their movies show real emotion and the imperfectness and sometimes unfairness of the world. All through a child’s perspective. In the case of ‘Kubo and the Two Strings’ the movie deals with loss and grief and letting go, but most importantly it is about remembering those you have lost because in memory they will live on. O man, this movie made me cry so much, they had managed to make the end a perfect amount of bittersweet. Not sugarcoating the reality, but still managing to give it a, somewhat, happy ending. Just perfection, please go see this movie. This is the IMdB page for trailers and such. 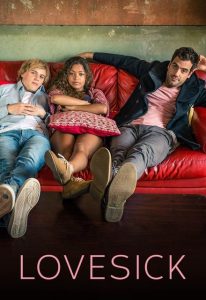 After this very long ramble about Kubo I want to move on to Netflix and Youtube. For Netflix I think you should watch ‘Lovesick’, originally marketed as ‘Scrotum Recall’. That name change definitely helped to make me actually watch it. It is about a guy, can’t remember his name, who finds out he has chlamydia and he has to let his exbedpartners know. Each episode deals with one of those exes (there are 6? episodes) and it shows him telling the ex, but also how they ended up hooking up. Because the episodes jump in time to go the specific hooking-up, it also shows you a little background into his past and who he has become and his relationship with his two best friends (a guy and a girl). It is sweet, very well set-up, I watched the entire thing in one go because it hooked me so well and I can’t wait for a season two.

For youtube, I want to give a quick shout-out to the vlog channel from ‘Casey Neistat’. He is a professional filmmaker who uses his vlogs to ‘tell a story every day’. The vlogs are beautifully made, with great time-lapses and drone shots of the places he is in (mainly New York). But he also shares some great advice. Overall highly recommend for some inspirational talks and visually pleasing stuff. 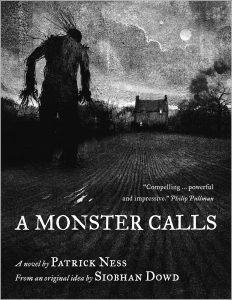 In comparison to June, I have actually read loads these past months. It went a bit slow in July because I wanted to finish ‘Moby Dick’, but I managed to finish that and then I read 6 books in September. It was hard to pick a favorite, but because I plan on writing a review for ‘Nimona’ later on I wanted to give this spot to ‘A Monster Calls’ by Patrick Ness. Which is also being released as a movie later this year.

Kubo was a movie for children, this book is also actually a children’s book. I know, I am not adulting very well lately, so sorry not sorry. A Monster Calls deals with loss and most importantly with impending loss. It is about a young boy named Conor whose mother is very ill, terminally ill. One night, just after midnight, a monster shows up at his window. But it isn’t the monster he has been expecting, so he isn’t scared. The monster wants to tell Conor three stories and the fourth story will be Conor’s turn and then he will have to tell the truth.

This book was amazing, I started reading it and I couldn’t put it down. I also bawled my eyes out, no surprise there. It was so beautifully written and darkly illustrated. It tells in a very ‘real’ way (again with the ‘real’) about the guilt and anger and other emotions someone feels when dealing with such a terrible situation. I have no adequate words to describe this book, just please read it, it was wonderful. A Monster Calls on Goodreads. 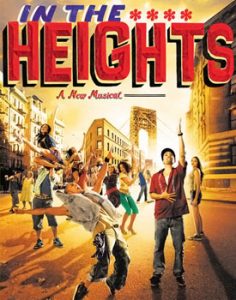 Once again my music tastes have been all over the place. Just after my Panic at the Disco phase last time, I rolled right into 21 Pilots. I listened almost exclusively to it all July and a bit of August. And then I decided to listen to Lin-Manuel Mirandas other musical ‘In the Heights’ and now I am obsessed. I already loved Hamilton (see one of my previous posts), but ‘In the Heights’ is also just great to listen too. I don’t know how to sell you on it, it is a musical about the latino community in Washington Heights and so the music is still musicalmusic (it tells a story throughout all the songs), but with definite latino influences in the music. It just makes me want to dance is all.