As you are aware by now (probably) I went on an excursion to Hamburg in the weekend of the 7th of november organized by my faculty student union Stylos. We visited Hafencity, the building site of the Elbe Philharmonic Hall and on Sunday we toured the old city centre and Wilhelmsburg. In my previous posts I wrote about the Hafencity Universität and the Energy Bunker in Wilhemsburg. This post will be the last Venture into Architectures about Hamburg and it is about a few of the buildings we visited in Wilhelmsburg after we visited the Energy Bunker and which are also part of the International Building Exhibition.

The IBA was an initiative by the city of Hamburg in response to the needs of citizens. After the great storm surge of 1962 claiming the lives of hundreds o people from Wilhelmsburg, a lot of residents left the islands. As a result the islands, the neighborhoods Wilhelmsburg and Veddel, became ‘problem areas’. In 2001 pro-active residents got funding form the municipality to host the Wilhelmsburg Future Conference where citizens and the authorities created a vision of the outlook for Wilhelmsburg. With the results of this vision the City of Hamburg started a project called “Leap across the Elbe”. Part of this project was the International Building Exhibition. This would be used to develop the southern areas of the city (Wilhelmsburg and Veddel) and to boost the growth of the city in its entirety. Read more about the IBA here.

One of the key themes of the IBA was Cities and Climate Change. One of the projects related to this theme was the Energy Bunker. Another theme was Metrozones. This theme was used to generate completely new quality of urban life in inner city areas, especially areas close to ‘unattractive’ places, like the harbor or a transit zone. Projects within this theme were the BIQ house and the Wälder Haus. 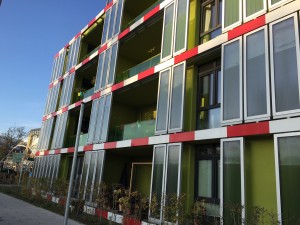 The BIQ house is the first building in the world with a bioreactor facade. In the glass elements, that form the second skin of the building, there are micro algae who are used to produce energy, control light and provide shade. The micro algae grow because of a continuously supply of liquid nutrients and carbon dioxide. All they further need is sunlight and time. When the algae are full-grown they are ‘harvested’ and fermented in an external biogas plant and used for biogas. The growth of the algae makes the color of the fluid in the facade panels slowly turn dark green. This provides shade. In summer the algae grow faster, thus providing more shade than in winter. To control the shading, the panels can be moved on a sliding rail. 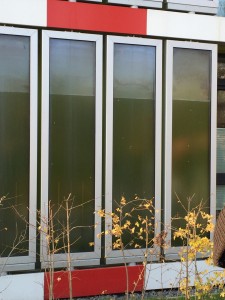 When we visited the BIQ house we only saw the outside. I think the system is very interesting. But because the sun is filtered through the green algae, the sunlight that enters your house is also greenish and I don’t know if that would be something you can get used to. If you want to read more about the BIQ house you can find it here.

After we walked by the BIQ house we went to the Walder Haus which not only houses an exhibition that looks at the relationship between the forest, the city and its residents, but also uses wood as a sustainable construction material inside the building and on the facade. The bottom two floors of the building are used for the exhibition on forests and sustainability and the top three floors are a hotel. The facade is supposed to be ‘inhabitable’ for small birds and insects. The wooden cladding has embedded plant-based nests for birds and there is also a planted roof for other animals. 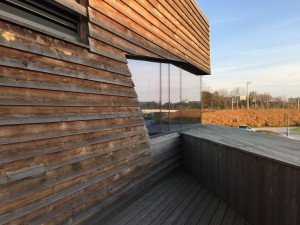 We were allowed to walk through the rooms on the first floor, which are used to house seminars or other events. The interior was decorated with beautiful artwork, which uses unworked wood. I really liked the building, the mix of concrete and wood worked really well and the vibe inside the hotel was definitely a woodlike one. I also liked that all the details were made from wood, even the acoustic paneling in one of the rooms. More information on the Walder Haus is here. 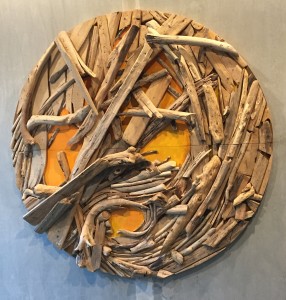 Overall I really enjoyed seeing the different projects in Wilhelmsburg. I thought it was interesting to see the BIQ house and the system it uses. It is good to see such an inventive idea for a sustainable facade in real life. I also liked the visit to the Walder Haus, mostly because of seeing the beautiful art, but also to see how they made the building feel like your in the woods. So I would definitely visiting the site if you are visiting Hamburg!

Filed Under: Travel
Tags: Architecture, Hamburg
Lichtjesavond in Delft
Concert at the Badcuyp