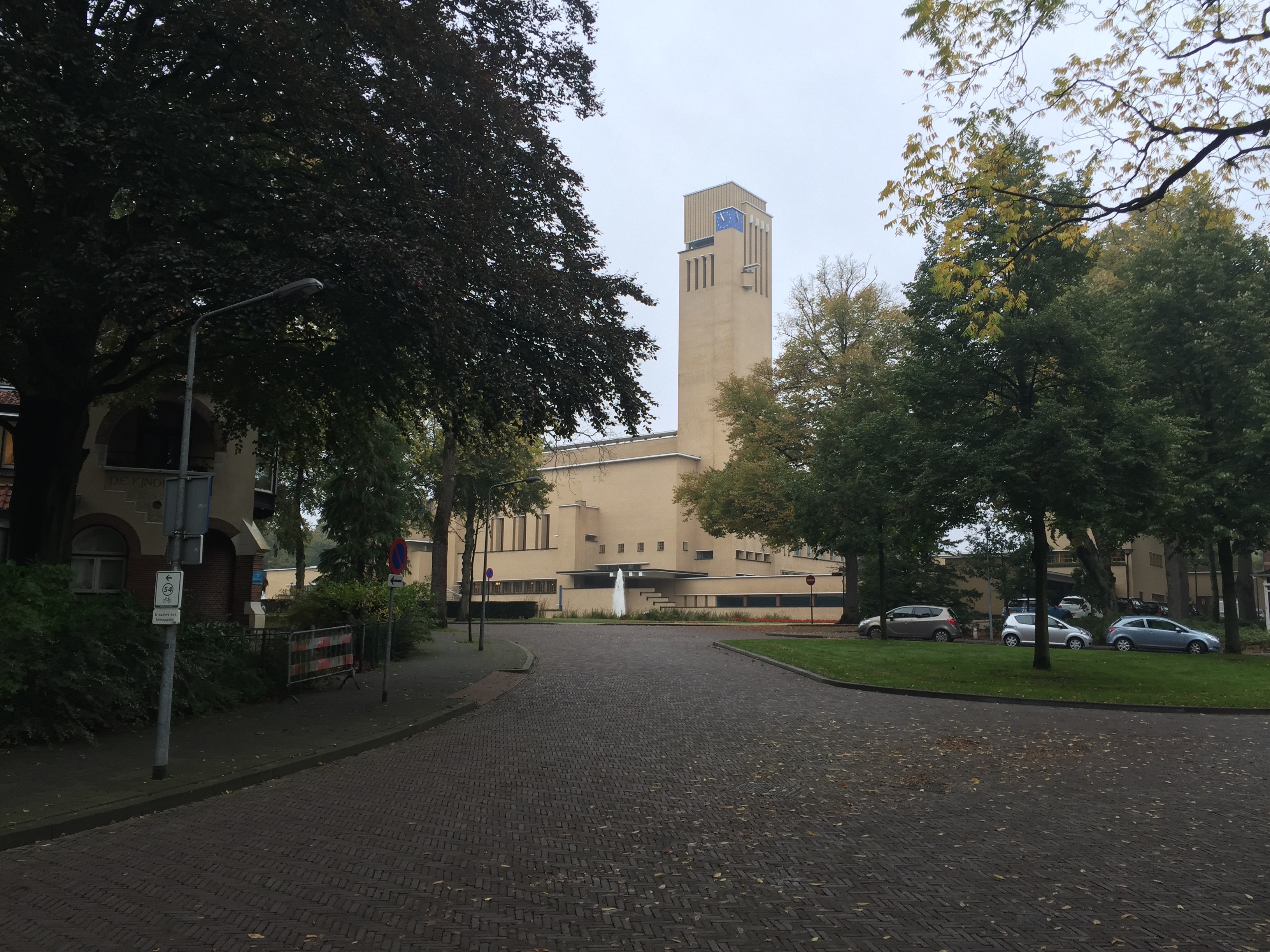 Last Friday I went to Hilversum to my very first conference on architecture. It was organized by the Dutch part of Docomomo, an organization for the documenting and conserving of modern monuments. After my exchange to Milan I have found that I am absolutely fascinated by modern architecture and especially its conservation and the many dilemmas that arise from wanting to preserving and/or restoring it. So when one of my teachers told us that there would be a conference in the Raadhuis by Dudok celebrating 100 years Dudok I was interested. There would be lectures on his life and works, but there would also be lectures from architects who had worked/are working on renovating one of his work. Especially this last part intrigued me. I was also interested in visiting the Raadhuis, since I had never been there and it was supposedly a beautiful building. Well I was not disappointed! 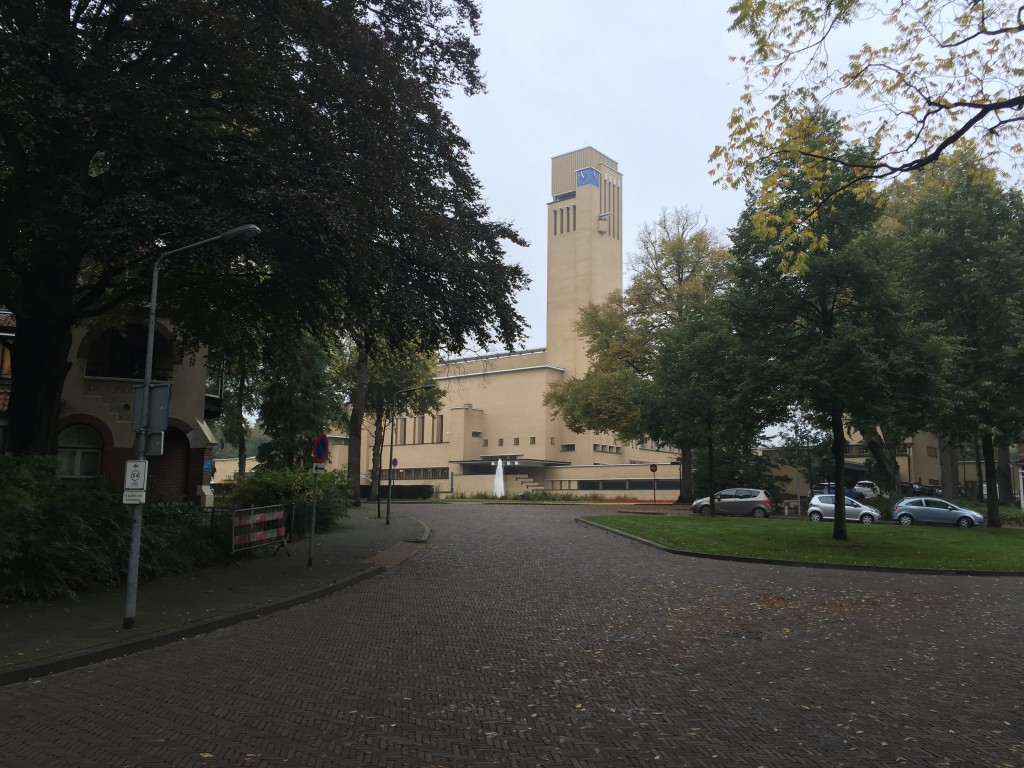 When you approach the Raadhuis (a short walk through the city center from the station), it suddenly shows itself through the trees. It was a very cloudy day when I went, so I can only imagine what it would have been like when the sky was as blue as the clock. The Raadhuis was a lot bigger then I expected and I immediately loved it. The variation in symmetry and lack of symmetry, the way the volumes from this interesting motion. My first stop was the Dudok information center, located in the basement next to one of the courtyards. They have some information on his works and you can get your own tour of the Raadhuis (more information here).

We also got a tour before the conference started and I really like the interior as well. They have completely renovated the building in the style of Dudok, researching and recreating original fabrics, colors and materials. Dudok had designed the entire Raadhuis, from the general shape to the chairs and size of the bricks and you can really see this detail going through the entire Raadhuis. 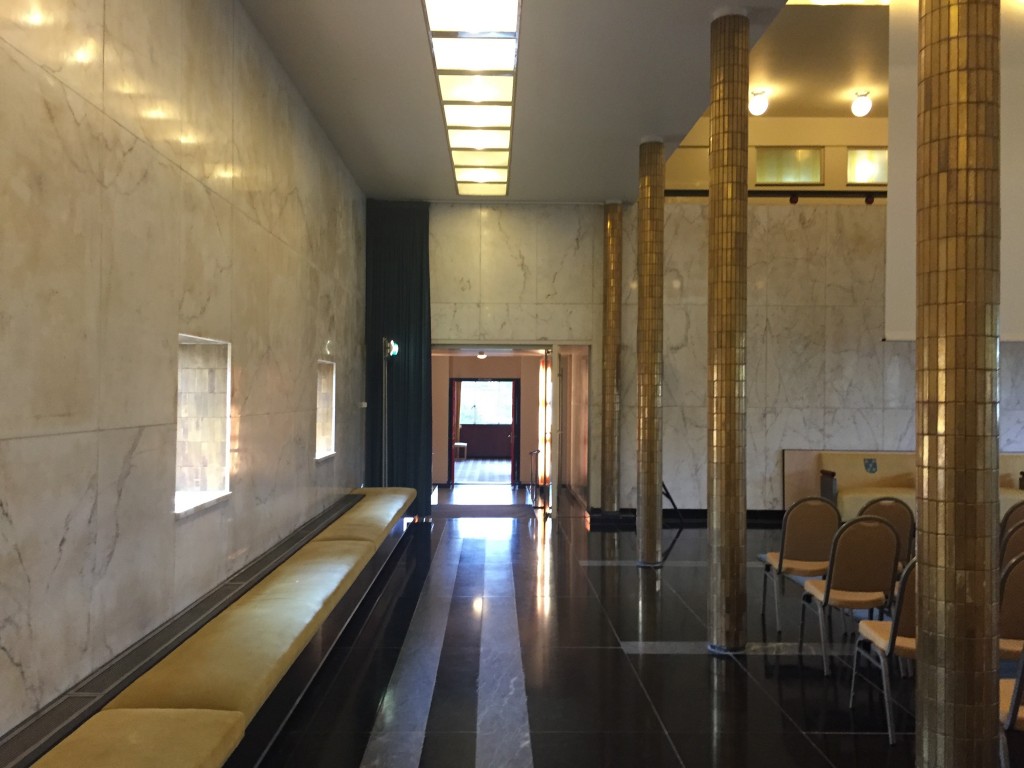 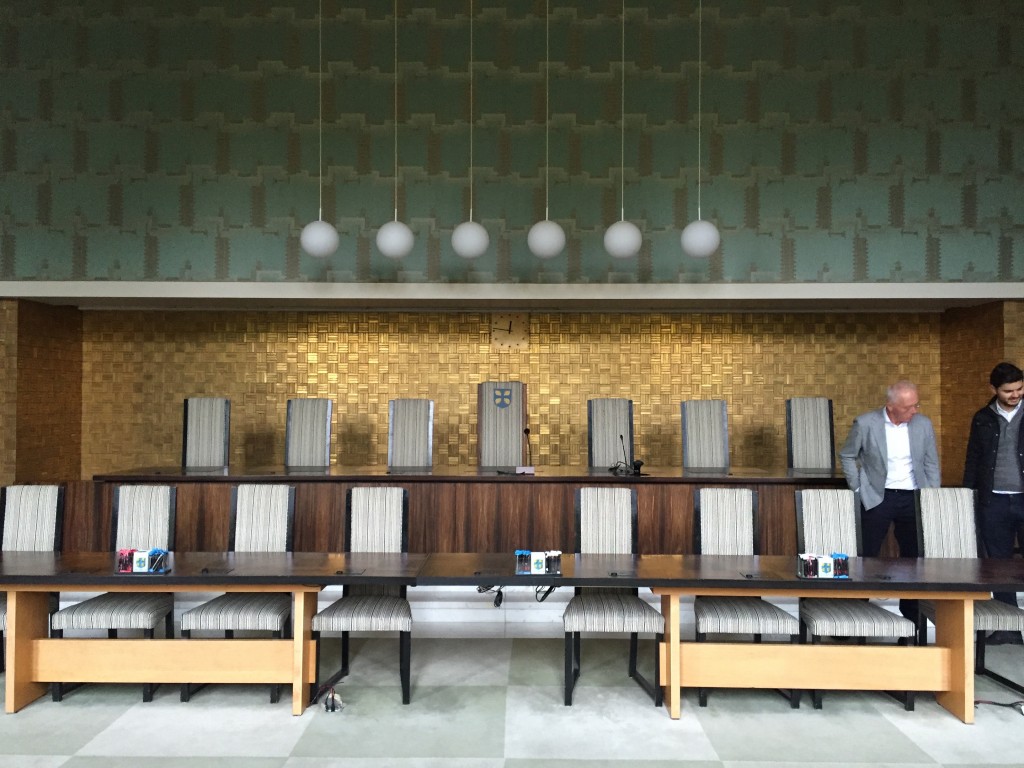 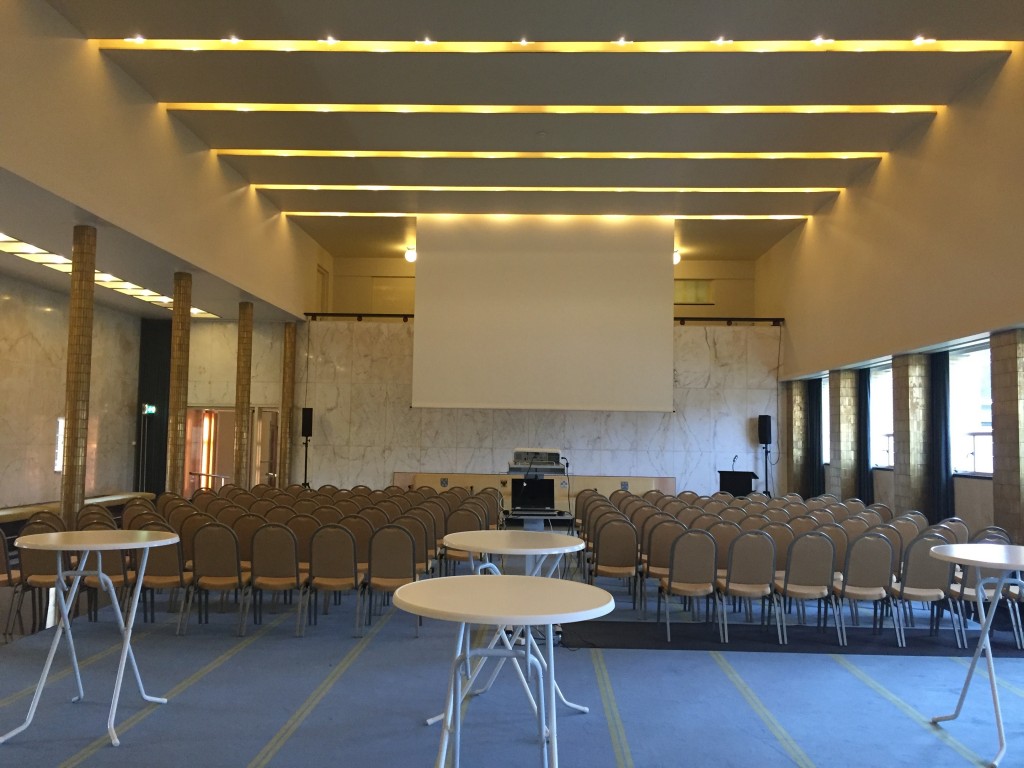 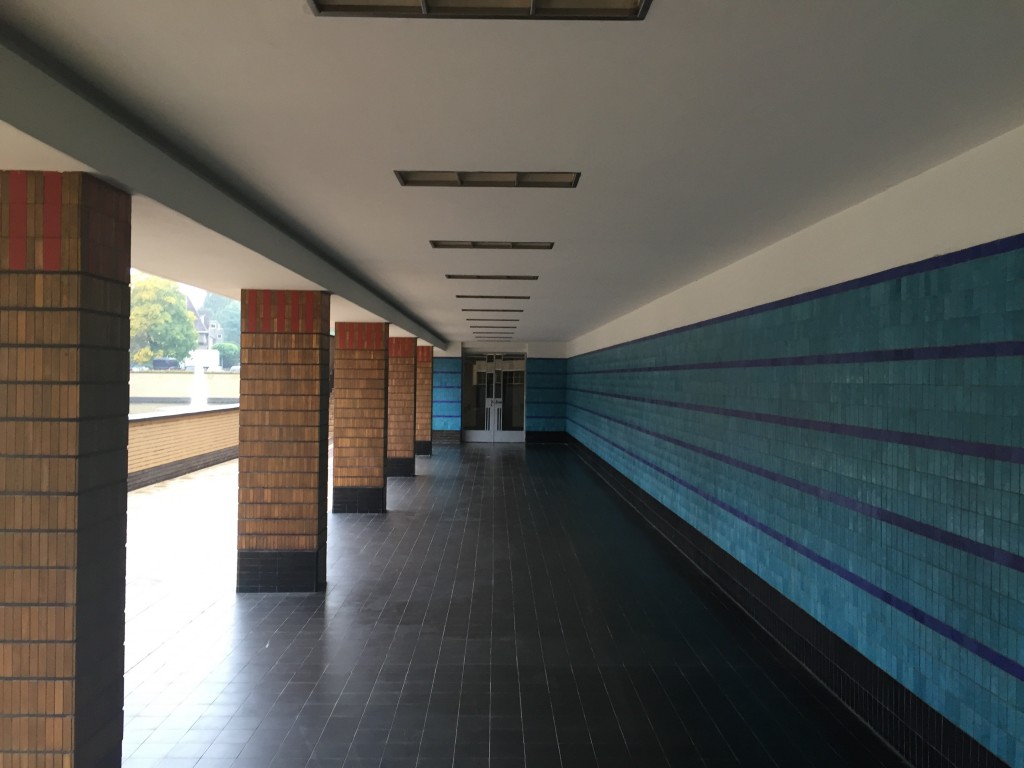 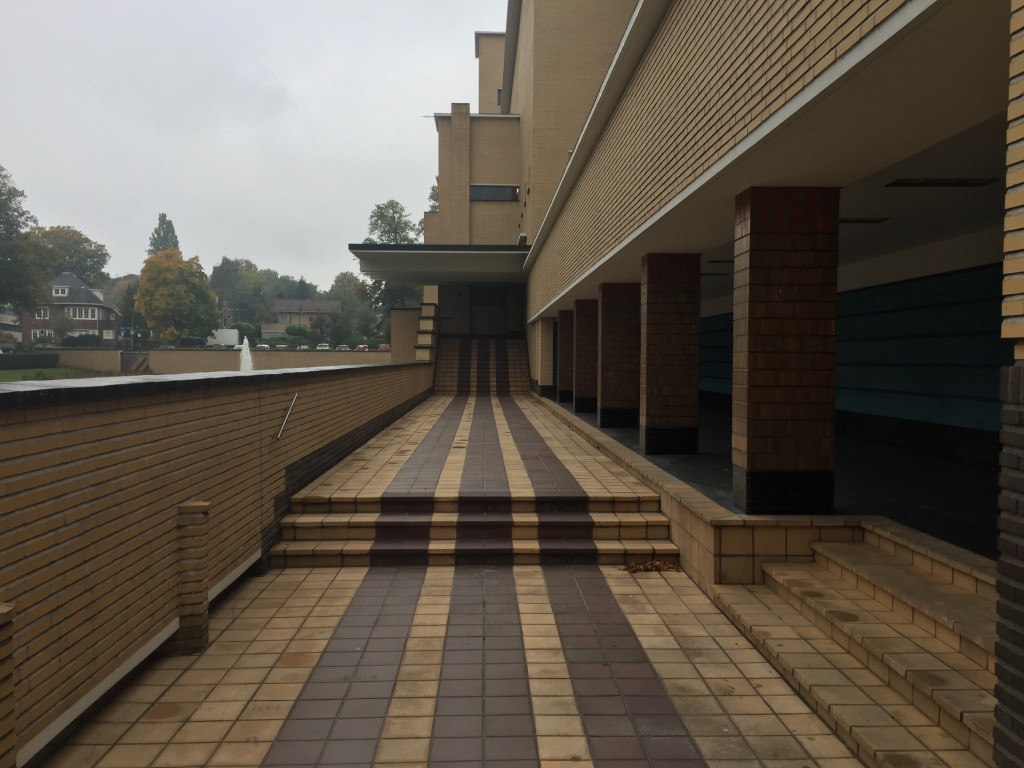 Should you pay a visit?

YES! When I was there I already knew I wanted to go back and get the full tour where you also climb the tower. I will be bringing all my friends as well, because I think it is a building you have to have seen in your life. When it was completed busses full of tourists immediately started coming to see this wonder and I think it still deserves the attention it is getting. I am glad that they renovated it and it can still be used as it was intended.